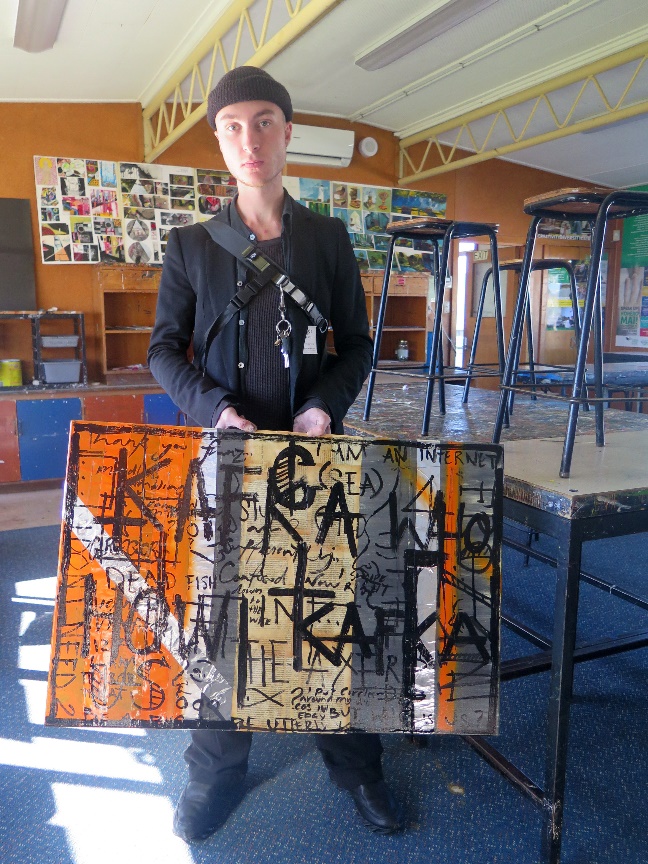 WHO, WHAT, WHERE, HOW AND LEAST IMPORTANTLY WHY?

This work is based on the general work of novelist Franz Kafka, as well as his quote on the subject of books; “A book must be the axe for the frozen sea within us”

The work itself tries to be kafkaesque. It is a distorted and aggressive image. The foreground is made up of layered text applied in ink. The text addresses the ideas that I found prominent in Kafka’s work, relationships, self and what we have the ability to do in the concept we refer to as life.

I look, like Gregor in The Metamorphosis, at my relationship with my parents and how their lives are effected by my decisions and vice versa. Beyond this I attempt to look at how we, as youth, can shape the world around us or whether our actions are only relevant in the context of just the platonic internet world that we have adopted.

This is all reflective of the questions the reader finds engrained in Kafka’s work.

The backing is painted acrylic. Layer upon layer, each to achieve the exact same aesthetic as the layer prior, the method is a parallel to the laborious efforts of banality in The Great Wall of China, another short work by Kafka.

The Orange is symbolic of heat and hazards, the method and dangers of breaking that frozen sea within us.

The Silver foil plays two parts. Both as a cheapened mirror, questioning whether we are what we see, and as my perhaps misguided glorification of critique and questioning of norms in general, as well as in the specific context of Kafka.

The wire and thread protruding from the canvas add depth and materiality to the work in the same way as the relatable struggles Kafka’s character face do to his work.

It is an ugly work, but it is intended to provoke and turn those away from a fantasy, or perhaps challenge them to look further into a fantasy giving it both materialization and the potential to not be a fantasy, but an action.