This has been one absolutely amazing season for the WSC Badminton programme. I am very proud to say that out of our 4 badminton teams (2 x boys, 2 x girls) that played in the Wednesday competition at the ABA Centre, two teams won titles in their grades.

Our boys and girls teams turned out to be very successful this season. We had several newcomers this year, some had experience, some were new to the sport, but it didn’t take long for them to show potential. As a result, the Boys’ Gold team (led by myself) took home 1st place in the open grade, with the Boys’ Green team (led by Mairano Raukawa) placing 2nd in another division. The Girls’ Gold team (led by Kelly Shi) also won 1st place in their grade, with the Girls’ Green team (led by Adriana Feng) coming in at a respectable 5th place. With an additional Girls’ team competing on Thursdays at Waitakere and currently placed 2nd equal with two games left, it seems likely they will go close to winning a title too….

But of course, we could not have done it on our own. I’d like to thank Mr. Thorpe for being an amazing coach, for training us and teaching us valuable skills. I also want to thank Eric, for providing transport for our players and to Mr. Cavanagh, Sami and our Girls’ Gold team captain, Kelly Shi, for their massive help in managing the teams with me, especially while our manager was abroad. Last but not least, a huge thank you to our manager, Richard Anderson, for again making it all happen. Thank you for always keeping us motivated and on track, and for taking care of us.

Thanks to everyone who participated in the WSC Badminton Programme and we hope to see you participating in the annual school tournament in September, being held in the new sports gym.      Harrison Cooke

Our First XV entered the 2C Auckland Rugby competition for the 2019 season. The team has had a pretty good season so far. Although they missed out on the championship grade on points difference, the boys have since excelled in the plate round, winning four games, losing only once and finishing 2nd overall. Having now qualified for the semi-finals, this gives Springs the all important home advantage, so we wish our boys good luck.

We need to acknowledge Dion Griffith, Stephen Summersby and Mike Cavanagh for their time and effort in building this team into a competitive one. For next season, we will lose only a few players, so the future 1st XV looks pretty good.

The season kicked off with four teams playing in the Auckland college sport competition. After a great four week build-up, all four teams went through the season undefeated, winning three titles and finishing runner-up with the fourth team.

Our Senior Boys’ Green team (Rhys, Harrison, Jack, Brodie, Felix) won the B Grade title for the 2nd year running, from our Senior Boys’ Gold team (James, Toby, Matt, Dave) who were also unbeaten, but had two draws. These two teams have dominated their zone for the past 2-3 years. The Gold team will now disband as all players are Year 13s. Our Senior Girls team have now won the ‘B’ title in consecutive years. Sadly, we lose three Year 13 girls, Mia, Stella and Stephanie, so it is hoped we will be able to develop some young and new talent, to join our top ranked player, Trelise. Our Junior Boys (Max, Olly, Eric, Marko, Aidan) were amazing, becoming Auckland Champions after they defeated the other zone winner Kings College in their Final. We look forward to this team developing into one of the best squash teams Springs have seen.

Big thanks to our super-coach Jude Ferdinand and to Jenny Jones for supporting our girls and the overall programme. Our squash programme will be completed at the end of August with the running of the school’s annual squash tournament. 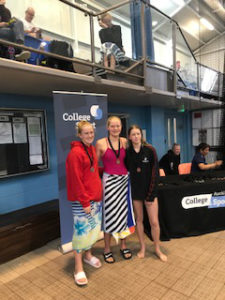