This term the junior philosophy students have had some interesting experiences outside of the classroom. The new cohort of year 9 philosophers travelled to the zoo for three education sessions exploring the ethics surrounding keeping animals in captivity. Our year 10 students had the chance to experience the Auckland Buddhist Centre in Grey Lynn as part of their topic on Buddhist philosophy and key ideas. After settling in with a group mindfulness session, our host Karunajoti, talked to the group about Buddhism. The class then got to spend the rest of the time asking all of the burning questions they had about Buddhism, some of which included “what do Buddhists believe happens when someone is reborn?” and “since Buddhists believe that craving and attachment to things hinders the path to enlightenment, where and how do Buddhists draw the line between needs and wants?” It was a great opportunity for the students to get a first hand account of what Buddhists believe and how Buddhists live. Finally, last week a group of year 9 and 10 students went to an interactive workshop on the topic of social media and ethics. With students from St Cuthbert’s and Epsom Girls’ Grammar, they explored, discussed and debated gritty questions such as “What is truth and is truth still important?” “What is the purpose of social media/how has its purpose changed over time?” “Does social media require us to commodify ourselves?” “Does social media enhance or undermine democracy?” It was a very relevant, timely and thought-provoking day which our students overwhelmingly enjoyed!

An exciting opportunity was presented to us at the beginning of term 4 when six students from the year 12 philosophy class were part of a documentary on pornography which screened on TVNZ’s Sunday programme on November 4. The small group, consisting of Gracie Mae Austin, Sian Azariah, Niamh Maher, Frank Cox, Martin Serpa-Djoulai and Luke Wijohn were filmed having a discussion with Jo from Auckland-based non-profit The Light Project about pornography and young people. Earlier this year year 12 philosophy had done a topic related to pornography, harm and censorship and The Light Project had come in to work with the students. To watch the full clip of the Sunday episode on the click here. The Light Project has a website with more information and resources about pornography for parents, young people and educators. 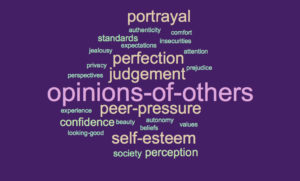 A word cloud of the students’ responses to the question

“What determines or directs what we include about ourselves on social media and what we leave out?” 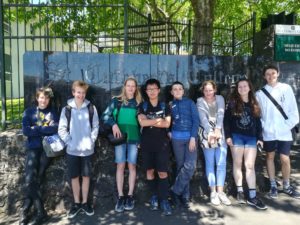