An exciting journey to China happened during April term break — 15 students from year 11 to year 13 Chinese classes plus 2 teachers departed on Thursday, April 11th, embarking on a 14-day experience in China, and returned to New Zealand on Thursday, April 25th.

Our trip was full of surprises and the unexpected, starting with the flight from Auckland to Beijing delayed for two hours, and due to that, we had to change our travel arrangement once arriving in Beijing, travelled another 3 hours by bus to get to another city to catch a flight to our first destination – Guilin.  Our students went into Homestays over that weekend and after that, we all stayed in the school we visited for 3 days to experience school life and dormitory life. Our students were surprised that the school day was so long, starting from the morning run at 7:00 to the night study session to 9:30. They didn’t get back to their dorm until after 9:30 every night. During the 3-day schooling, our students attended lessons with the local students, as well as learnt some special lessons, such as Chinese instrument learning, martial art learning etc. 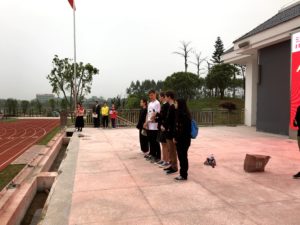 On stage at the whole school assembly 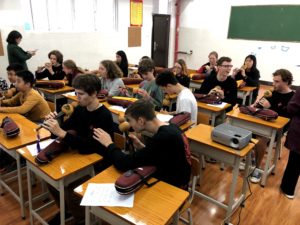 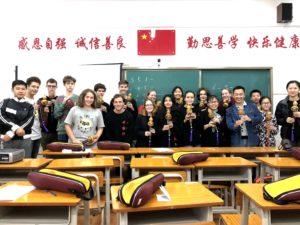 Though every day was busy and long, our students enjoyed the different school days  and got a lot out of what they saw. They were always surrounded by the local students every break time and asked for signatures, just like superstars. 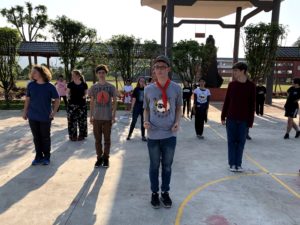 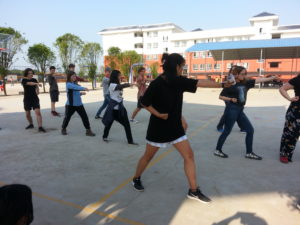 After the school visit, we embarked on the sightseeing experience, touring the beautiful places in Guilin, and then moved onto Beijing. We took the speed train (at the speed of about 300km per hour) from Guilin to Beijing, and it should have taken us about 11 hours, but again something unexpected happened during the train ride and we arrived in Beijing 5 hours later than the scheduled time. Everyone was exhausted from the ride as it took longer than the plane ride. 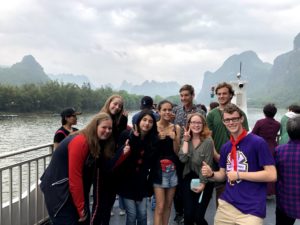 Cruising the Lijiang River in Guilin 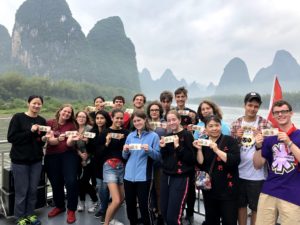 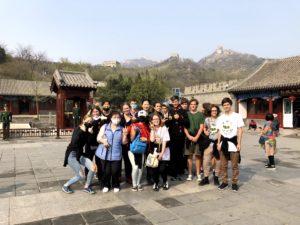 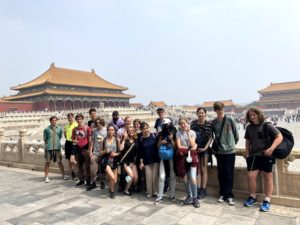 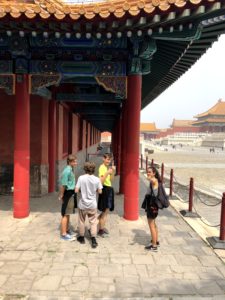 In Beijing, we visited the Great Wall, Tian-an-men Square and the Forbidden City, and at each place, our students did the martial art they learnt to mark their visits. Overall, the trip was full of unexpected delays but our students were not discouraged by them. The trip brought a lot of fond memories and benefits to our students in terms of learning the culture and using the language learnt in class and will have a positive impact on their learning in general and perspectives in life as well. Here are the thoughts from some of the students about the trip:

– Even when the weather is not that cold, everyone wears long pants and no one wear shorts; you could always pick out a foreigner.

– Even though there are so many people in China, everything was so spread out, especially in Beijing, that you never really saw that many people (apart from Tiananmen Square &
Forbidden City)

– There is very good and very cheap food everywhere, no wonder there are no fat people in China.  Additionally, meats are much more available in a meal than in NZ. 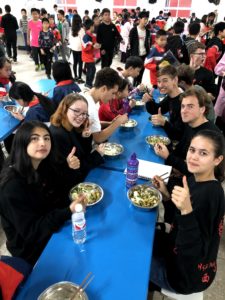 At the school cafeteria

– In Guilin the gardens and on the side/middle of the road, there are heaps of plants and it is all nicely kept, and lots of trees too.

I think what shocked me most were the three beggars we saw. They really wrenched my heart. One of them was on the steps on the way from the boat to the road that had a bunch of markets in Yangshuo. He had no arms, just small stumps which he managed to use to hold a bowl. The other two were also on the streets of Yangshuo – they were the ones that really shocked me. They were both crawling around on the floor, they were skinny and looked really unhealthy and they seemed to have some sort of mental disability because they were just grunting and making weird noises :

Otherwise, the school was different from my expectations – I knew it’d be different just not THAT different. Living at school was an interesting experience.

I think what most impressed me was the reed flute caves. They were so surreal and the way they were lit was so fantastical. However, all of the scenery impressed me if I’m being honest.

I think the trip benefitted me in a number of ways. Firstly, I definitely think my Chinese improved – being in the school with the students made me more comfortable with speaking and improved my ability to guess what someone was saying based on the words I know. Secondly, it gave me a really good cultural experience and a chance to see where some of my ancestors came from. Bonus, the food was really good 🙂

I noticed that there was a surprising amount of English, even the school bell songs were in English.  I also thought it looked very similar to places such as India. I thought the mountains in Guilin were really cool. The sky was very grey and polluted which is never good.

What shocked me was how similar family dynamics were in China as I hadn’t really had a point of view on it before the trip. The most memorable moment was being able to spend time with my homestay and talk about what we found different about New Zealand/China. The benefits I got from the trip is not only random new vocabulary but also the ability to talk to native Chinese speakers who I had become friends with on the trip.

The whole experience was so different from the culture that I have grown up with, with most aspects of daily life in China being unique from New Zealand life. I think that the most ‘shocking’ aspect of life in China was schooling. Even for a boarding school, a 12 hour day is extremely long by western standards, and students in the school we stayed at were undergoing very challenging concepts and learning. I had heard that schooling in China was difficult, but I did not expect it to this extent.

My most memorable moment during this trip was creating and strengthening connections between people in my Chinese class and people that I met in China. I believe that some of the friendships I created while in China will be very long-lasting, and that is invaluable to me.

I think what most benefited me was that I was able to experience another culture, very different to the one that I am used to, and through the use of my Chinese, I was able to communicate and form connections with people in China. This will definitely be a positive lasting memory for me, and this makes me eager to travel in the future.

I wasn’t expecting China to be so different to New Zealand, whether if it was the way that they run their schools, to how they go to the toilet. One thing I loved the most in China was the food, I might just be in love with Guilin rice noodles ;), I also really enjoyed going to the Great Wall, that was a wonderful and memorable experience. This trip really encouraged me to apply my Chinese knowledge outside of the classroom and in front of native speakers. Overall, I felt that this was a very beneficial experience.

The China trip was a really eye-opening experience. For me personally, I wasn’t going into this trip completely clueless of what to expect, as I had been to China multiple times in the past. Compared to past experiences this time around was different as I was seeing new things with new people, which made this trip more worthwhile and memorable. Some of the most memorable moments weren’t necessary when we saw ancient artefacts, but rather moments spent with fellow students. I went into this trip merely expecting to see and learn about China’s history and culture, however, I came out of this receiving so much more.

The school experience was really interesting, and I really enjoyed seeing how different education was over there – from the timetable, the methods of teaching, to bell sounds and ceremonies carried out. I was really impressed by how their year six’s were doing maths at our year nine level. My most memorable moment at the school was probably the farewell ceremony, where we, unfortunately, had to say goodbye to everyone. All of the kids there were super nice, and I would have loved to play more badminton, basketball, talk, eat and hang out with them – even though it’s a little hard to communicate.

What surprised/shocked me the most was the squatting toilets. They are extremely uncommon in NZ, so they certainly took a while for me to adjust. Another thing that really surprised me was how interested in Western culture the Chinese were. Basketball seemed to be the sport of choice for many Chinese people, and they listened to many different Western bands/musicians (Linkin Park and Rich Brian seemed to be particularly popular, especially with the youth).

What impressed me the most was how kind everyone was to us. I think they were probably nicer to us because we are foreigners, but I definitely thought they were really lovely people to meet. Everywhere we went, we were always treated well by everyone and were occasionally given gifts.

I think I really benefited from talking to a lot of non-English speakers. And I mean A LOT. A good portion of the people in China could say “hello” and “goodbye,” but that was it.

ATHLETICS :     CENTRAL ZONE The following students were selected to compete in the Central Zone…

Supporting success in your school

This Newsletter provides me with the opportunity to thank you, our Springs/Waiōrea community of parents…