Across the month of October, the Herald teamed up with World Vision to make New Zealanders aware of some terrible problems particularly in Myanmar and Bangladesh faced by young women. Called ‘Not for Sale’ the media campaign set out to educate and confront us about how different the daily lives and expectations of these young girls could be compared to the relative freedom and wellbeing of their peers here in Aotearoa.

A group of seven students representing both parts of the school, Nga Puna O Waiorea and Western Springs, agreed to participate even though it was the first week of their holidays. Those girls are: Kayla Nadia, Paloma Hermans, Rose Hammond, Zoe Tibbutt, Riley Adams, Tylah-Jade McIntrye and Angie Matthews. 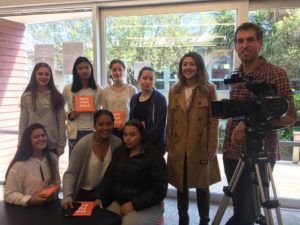 “During the term 3 holidays I was one of seven girls who participated in an incredibly interesting media experience here at school. The World Vision ‘Not for Sale’ campaign wanted us to see footage of how girls our age in other countries are being treated through human trafficking, child labour, underage marriage etc.

We worked in two groups and watched videos and listened to interviews focusing on these topics. We all knew that this kind of thing was going on in the world but didn’t realise how far it extended and how intense it was. They really showed us far more than we were ever taught before about these issues and I was quite shocked.

The experience opened mine and the other girls’ eyes to how easy we have it in a first world country like New Zealand. One of the young girls in the video was working 12 hours a day for the equivalent of 10c a day. She was only 14 years old and her childhood was over already.

We aren’t expected to be ready for a part-time after school job until we’re at least 16 and we also have reasonable hours and get paid minimum wage.

This experience with ‘Not for Sale’ was insanely interesting for me to be part of and is something that I think more people should look into.”

‘In the holidays me and six other girls aged around 14 years old were interviewed by the Herald for a story called ‘Not for Sale’. First they filmed us talking about our dreams for the future. Then we watched a 3D video about an Indian teenager who was forced into an arranged marriage because her parents couldn’t afford to feed all their kids.

It really shocked me and made me think about how lucky I am to have food every day and to be able to make my own decisions and still be a kid. I am really glad I took part in this and at the end they gave us a 3D viewer to use with our phone.’

Being interviewed by the Herald for their recent public awareness campaign called ‘Not For Sale’ was an eye opening experience. It shone a light on the lives of many young women who are struggling to survive and it helped me understand what it might be like to live in a world where you have to work, without breaks, for twelve hours a day on really low money. ‘Not For Sale’ also showed us a short film about how it feels being forced to marry someone much older at the mere age of 15. These films and stories shocked me.

I am glad that I was able to help bring awareness to these problems so that they might be able to be stopped. The interview also made me appreciate what World Vision is doing to help these girls and show them the true potential that they have. I am very grateful for the opportunity that was given to me to take part and I hope that it helped to bring attention to problems that those young women face everyday.