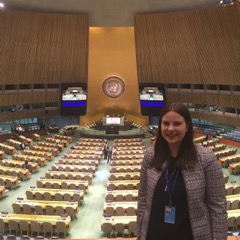 When I was a student at Springs between 2006 and 2010 I don’t think I quite realised just how much of an impact it would have on my life.  I thought that high school was just high school. Although I, being a girly swot, loved school, I still didn’t anticipate the impact that this School would have on my outlook of the world and my aspirations. Our teachers treated us like their equals. We learned to respect and value diversity, in all of its forms. It didn’t matter if you weren’t academically inclined – talent was talent. We were all part of the same community and we helped each other. We gave back where we could and we cared about things that were bigger than ourselves. In our current social climate, these values are more important than ever. These Springs’ values have shaped who I am today.

When I left Springs, I went to the University of Auckland to study a Bachelor of Laws (Honours) and Bachelor of Arts, in English and Politics. I wasn’t sure what to do when I finished school, and I definitely didn’t realise I would become a lawyer, but I guess it always made sense considering my favourite subjects at Springs were English, History and Drama.

I graduated in 2017 and worked as a Judges’ Clerk at the Wellington High Court – Te Kōti Matua. This was an amazing opportunity to work with two judges, Justice Simon France and Justice Helen Cull, doing anything and everything legal related for them. The High Court sits in the middle of the Aotearoa judicial system; it is a court of first instance (for civil and criminal trials) as well as an appellate court. I got to work on a wide range of cases, including Eminem suing the National Party for breach of copyright, high profile murder and manslaughter cases, and a case involving an ex-Naval officer suing the New Zealand and UK governments for being sexually assaulted at work.

I’ve recently started a job as an Assistant Crown Counsel in the Criminal team at Crown Law – Te Tari Ture o te Karauna. I work as part of the Crown prosecution network, giving advice to the Solicitor-General and representing the Crown in cases that are heard in the Court of Appeal and Supreme Court (our two highest Courts).

My sense of community and wanting to give back was fostered at Springs and has only increased since then. I’m passionate about women’s rights and advocating for those who don’t often have a voice in our society. For many years now this has been the focus of my studies and spare time.

While at University I was Co-Women’s Rights Officer for the Auckland University Students’ Association, became a board member of the YWCA Auckland and Co-Director of the Equal Justice Project, a pro bono initiative run out of the Auckland Law School. I’ve won awards and been published for papers I wrote about our wāhine and the law, including about the needs of young women offenders and gender in the Aotearoa Youth Justice System, as well as how the law can effectively hold United Nations Peacekeepers to account for committing sexual exploitation against women and girls.

Since leaving University, I have co-founded New Zealand’s first legal academic journal about gender and women’s issues: the New Zealand Women’s Law Journal – Te Aho Kawe Kaupapa Ture a ngā Wāhine. My friend, Ana Lenard, and I felt that lawyers were not doing enough to advocate for the women in our communities and our profession. We wanted to bring these issues to the fore as well as create a supportive network for female lawyers. I was a Co-Editor in Chief from June 2016 to January 2019 and continue to be a Trustee of the Journal.

Through this role, I’ve been lucky enough to have numerous other opportunities that I wouldn’t have had otherwise. In 2018 I attended the United Nations Commission on the Status of Women with the Aotearoa Youth Leadership Institute and got to spend two weeks at the UN talking about women’s rights with women from all over the world (see the picture above!). I’ve been part of numerous conversations about #MeToo and culture change in the legal profession, including a solutions-based project trying to capture ideas for change: Gender in the Legal Profession. In late last year I was also appointed to the New Zealand Law Society’s Culture Change Taskforce, which is a group of practitioners from all over Aotearoa who are trying to create and drive systemic culture change in the profession. It’s certainly been a busy few years for me since I finished school!

I’m not sure where to next, but I’d like to have a job that incorporates my passion for women’s rights, law and policy – who knows if that even exists yet!

My roots will always strongly lie at Springs and I often think back fondly on my years there. Whether it was nattering outside D block, performing at TAPAC, running around on the netball courts, being part of the Student Leadership team, or sitting editing movies in the media studies rooms. I am grateful for all of the teachers who believed in me and challenged me to do better. I made some of my best friends at Springs, and even found a fiancée out of it! But, I’m mostly grateful for the values the School instilled in me and the confidence it gave me to pursue my passions.

The commissioning of students to create artwork for the school library began in 2001.  The…